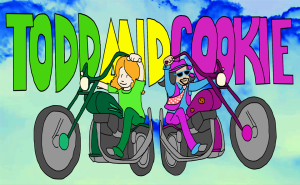 Get on board, step inside, soarin’ on a magic ride.
Roarin’ towards the other side where only rainbows hide.
On the Great Space Coaster (Oh-oh oh)

The lines above are part of the theme song from one of my favorite childhood TV shows, The Great Space Coaster. Each episode took place on an inhabited asteroid (Coasterville) and followed the story of 3 musicians who were brought there by a space coaster. Along the way, they met new friends in the form of zany puppet characters. I think I might be part of a small population who remembers this show, but it was a classic. It was adventurous and totally off-the-wall funny for its time!

This brings me to the latest pairing of kindie rockstars whose debut project brings me the same kind of joy. Todd McHatton and Mista Cookie Jar (CJ Pizarro), or simply put, Todd and Cookie, recently debuted their first mini album, Todd and Cookie’s Epic 3 Song Starter Pack, along with a world premiere of their cartoon, The Great Adventures of Todd and Cookie. Episode 1, called “World of Rock,” illustrates how the two rockstars are catapulted to destiny when a mysterious creature asks, “Anybody wanna rock?” You’ll have to watch to see how this story unfolds. It’s a truly visionary experience that promises to take you on a magical, mystical adventure unlike anything the kindie world has ever seen!

The pairing of Todd and Cookie  is not something people might have predicted or expected, but together they complement each other very well. In fact, the parallels between the two, is what I am most impressed by. Their sound is overflowing with authenticity, creativity and a unique sense of humor. They regularly stretch the boundaries of their imaginations, creating compelling experiences for their audience. And they also incorporate family as an essential part in each of their respective careers.

McHatton is a puppeteer and an artist whose cartoon drawings can be seen on his album covers and throughout his videos. He is well-known for his wildly popular single “I Think I’m A Bunny,” featuring daughter Hazel and lovable purple puppet, Marvy Monstone.

Pizarro is a master rhymer and lyricist with a whole vocabulary of his own. Typically, as Mista Cookie Jar, he performs with The Chocolate Chips which feature the supporting vocals of his step-daughter, Ava Flava. MCJ, known for his retro fashion and diverse musical style, has produced many popular singles including “Inner Rock Child” and “Lover Not A Fighter.”

Each track on Todd and Cookie’s Epic 3 Song Starter Pack delivers a concoction of sounds that blend the softness of Todd’s dreamy, psychedelic sound with Cookie’s groovy, hip hop sensibilities. My favorite tune, “All These Magical Things,” has a nice melodic flow while “HotchToozZee” is a hodgepodge of fun. The album ends with “Your My Bestest Bro” which is an ode to Todd and Cookie’s relationship and could easily be the theme song for The Great Adventures of Todd and Cookie.

So sit back, relax, and enjoy the ride! The duo will be releasing web comics & cartoons every 3 months chronicling Todd and Cookie as they explore the catapult of destiny! You can receive updates by following their site as well as their YouTube channel.

Listen to and purchase the tunes from Todd and Cookie’s Epic 3 Song Starter Pack through the Bandcamp widget below. Recommended for ages 4 -8.