Happy Valentine’s Day! Thinking about how to show/feel the love today? Why not whoop it up with a new video by Mista Cookie Jar and the Chocolate Chips? “Lover Not A Fighter,” a hip track from Mista Cookie Jar’s Ultramagnetic Universal Love Revolution, honors the purity of old school funk and soul while blending in some new school kid hop by Miss Ava Flava.

Set to the backdrop of the infamous Soul Train Line, the fashionable MCJ and Miss Flava get their groove on while delivering a message about being a leader and setting an example for others:

Sometimes u gotta fight for peace,
but when ur strong u just love and lead.
So all u boys and girls go show this world
just how the good life’s meant to be.

The video for “Lover Not A Fighter” is filled with fun. Much like videos previously released by MCJ and The Chocolate Chips, it’s infectious and invokes spontaneous wiggling and shaking. Anything by this crew brings a smile to my face.

Plus, watching the amazing Soul Train dancers in the background is priceless and symbolic of pure happiness and love.

So, go on, make your own dance line, turn up your speakers and make this Valentine’s Day the “hippest trip” your family has ever seen.

Valentine’s Day special: FREE Download of “Lover Not A Fighter” all day on February 14, 2013 via the the Bandcamp widget below.

The Sugar Free Allstars are back with their third kids’ album, “All On A Sunday Afternoon.” This album, like other releases from the duo of Chris “Boom” Wiser and Rob “Dr. Rock” Martin, contains the usual infectious funk/soul/rhythm and blues sound while also paying tribute to Motown and Stax Records.  And, they’ve brought some additional friends to, er, pump up the jam.

“All On A Sunday Afternoon” is filled with sentiment and love and feels as though it is coming from the personal parenting experiences and musical influences of its creators.  This is most evident in “Sunday Afternoon,” (featuring additional strings from Keith and Ezra of Trout Fishing in America) which talks about spending time with family, as well as, a couple of smoother jams like “Very Best Friend,” a sweet little song about love and companionship, “99 Questions,” a gospel number featuring Wiser preaching about gaining a better understanding of the world by asking lots of questions and “Ready To Give Up Teddy,” a heartwarming ballad expressing a child’s feelings about being ready to give up sleeping with their teddy bear.  But, instead of being sad about the separation, the child is reassuring Mom and Dad that they are ready for it.  The song coincidentally has some parallel melodies to “Easy” by the Commodores which further supports the bands appreciation for Motown.

The album starts out strong with the high-energy “Gotta Get-Up,” featuring the addition of Shawana Kemp from Shine and the Moonbeams and Jack Foreman from Recess Monkey who make excellent and very convincing advocates for getting out of bed in the morning.  I like to think of them as sort of a power-up brigade.  Along with the album release, the duo released a video featuring stop motion animation by Kyle Roberts of Reckless Abandonment Pictures.  The video is packed with action, literally and figuratively, as the duo are turned into action figures while other toys are taking over and trying to get Wiser out of bed which includes everything from cookin’ some eggs to a firetruck rolling Wiser’s clothes over to him.  And in true Sugar Free Allstars fashion, we are called to participate in a funky dance called the “Stretch and Yawn.”  It’s easy and gets your energy flowing.

The following song, “Hiccup” a fun and educational song which is filled with the beloved Allstars organ sounds and some handclaps while adding commentary informing us about the science behind those little buggers.

“Put ‘Em Away,” is a fast paced funk-venture that puts a fun little twist on the traditional clean up song and it features awesome auxiliary percussion by Marty Beller of They Might Be Giants, as well as some sweet bass by Jay Wilkinson.

Another notable song is “Love Train” which not only features Keller Williams giving the song a psychedelic edge with the addition of a guitar and kaosilator, but also features the family funk host Sir Groove-A-Tron.

As a big fan of the Talking Heads, I was pleasantly surprised to hear the Allstars perform their own version of “Stay up Late” which is an excellent rendition of the original version but with the bonus of some sweet organ noise.

The Sugar Free Allstars have once again produced a fun series of songs that are sure to be enjoyed by the 3 through 8 yr old crowd.  The 36-minute album also features a full-length concert DVD which provides some insight into just how energetic and powerful the live shows are.

I will leave you with one last thought that embodies the spirit of this album: Just like Mr. Don Cornelius used to say “we wish you peace, love and soul.”

You can stream the album below, as well as, view the video for “Gotta Get Up.”  Enjoy!

Disclaimer: I received a copy of the album  for possible review.

The 3rd family album from the Sugar Free Allstars, “All On A Sunday Afternoon,” dropped today – hooray!  But, that’s not all….there is a new video as well.  Directed by Kyle Roberts, the video is a stop action toy adventure featuring Boom and Dr. Rock in the form of Ken dolls singing and playing the drums.  The song also features Shawana Kemp (in the form of a cute little teddy bear) from Shine and the Moonbeams and Jack Forman from Recess Monkey, adding lots of funky flavor.

So, get ready to put those hands up in the ay-yah and do the stretch and yawn cause it’s time to get up! 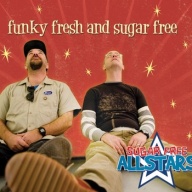 When my 3yr old brought out her Parum Drum kit and started slapping some serious skin, I knew we had just stumbled upon some great music. She even looked at me beforehand and said “now we are going to jam.” And we really did.

So, what can I say about the Sugar Free Allstars besides the fact that they bring the funk. Hard! Listening to this album makes you fist pump and head bob harder than you every thought you would listening to “kids music.” At least that is what happened to us. We couldn’t help ourselves and the body rock didn’t stop til the album was over!

The Sugar Free Allstars are an Oklahoma City duo made up of Chris “Boom!” Wiser (Hammond B-3 organ, lead vocals, saxophone) and Rob “Dr. Rock” Martin (drums, back-up vocals). Two guys, that’s it. Together they bring a dynamic mix of humor, energy and serious sound. Their sound is comprised of some New Orleans soul, funk, disco and rock the likes of which could probably be found at Jazzfest or even along Beale Street in Memphis. The addition of the organ and saxophone are much welcome guests to the party.

Starting from the resounding “Rock Awesome,” you are immediately pulled into participating in the whole experience that Funky Fresh and Sugar Free has to offer.

It’s hard to name which tracks are my favorite because it’s all so goooood!! After you finish “rocking awesome,” the album progresses into some funkier tracks, leading up to “SFA Disco Dance Party,” which starts off with Sir Groove-A-Tron luring you in with the incentive of getting all funky and learning some new dance moves “that you can do every day.” Yes, Sir!

“In My Pocket,” a particularly relatable song, talks about stashing treasures in your pocket, some of which include “a little green army man/ and a rubber ball/17 cents in change/ and that’s not all/some rocks I found in my backyard/and a marble or two/and a handful of play-doh/i like to mix yellow and blue.” I think most parents should be able to relate to the regular accumulation of random and most prized posessions.

Other great tracks include “6th Grade Band,” “Cars and Trucks,” “Obla-di, Obla-da,” and “Tiger in My Backyard.”

After participating in the call and response of the “Train Beat Song,” the album ends with an applause and a “Thank You, Goodnight, We Love You.”

But, it’s not just about the music with these two. There is humor, which is most evident in their lyrics, as well as their videos and photos. I especially love the applause and concert-like intro to “Rock Awesome,” as well as, the concluding applause after the “Train Beat Song.”

All wrapped up, it’s a delicious package that can be savored any time of day. I dig it.

Recommended, but with the volume turned way up!!!

Below you will find a selection of videos from SFA but I also wanted to include two collaborative efforts. “Cooperate”, a collaboration between Sugar Free Allstars and Secret Agent 23 Skidoo is featured on “All About Bullies Big and Small”, the anti bullying compilation that just won the Grammy for Best Children’s Album!