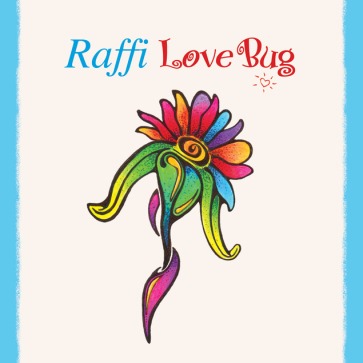 Love Bug, Raffi‘s first album in 12 years, wiggles its way through your heart and beautifully delivers the best kinds of hugs and peaceful wishes. Raffi’s comforting voice picks up right where he left off, and right where we left off when Raffi was part of my daughter’s nightly bedtime routine. In fact, upon hearing the opening notes of “Doggone Woods,” she thought she was hearing one of her favorite songs from previous records. I explained that it is a new Raffi song which sounds just like the songs she loved when she was little and she responded with an affirmative “Yeah, just like the olden days.” It’s true, Raffi has mastered a timeless sound that has captivated generations of listeners, leaving a musical mark in the annals of their childhood.

The most poignant and profoundly deep song, “Seeing the Heart,” captures the innocence of childhood and the propensity children have to see goodness, love and possibilities in the world. “Seeing the Heart” paints a picture of a mother and son creatively working together. “Mama drew the pictures/ Boy drew the words/ A mother and son connection.” What makes this song so touching is what the boy adds to the picture. “He showed a chamber of goodness, wealth and poverty/ He showed a pump of flowing happiness/ He drew a hate outtake valve/ A simple attachment.” Raffi nails the fact that children often feel the world just as much, if not more than, they see it. It’s as if they have a sixth sense allowing them to genuinely experience the world with their hearts.

Like most of Raffi’s music, the sounds of the songs on Love Bug are enjoyable and fun to sing along with, but what my daughter and I got out of this was a closeness from many of the positive messages nestled within each track. The songs on the album are upbeat, but we weren’t always moved to dance to them. Instead, we were moved to explore the meanings within them, together, resulting in some thought-provoking conversations. Although, if you are looking for a little movement, songs like “Cool Down Reggae” and “Pete’s Banjo” are your tracks.

And now for the verdict: After 12 years, Raffi remains an iconic figure that will forever remain a familiar voice for generations of listeners. Love Bug will bring the joy of music to many families, while also reminding us to live life with childlike wonder.

Love Bug is available at Amazon and Indigo.

Below is a video for the title track “Love Bug.”

One thought on “Check this Out: Love Bug – Raffi”