Great new video from Aaron Nigel Smith‘s recent release Welcome to the Village, featuring the children of One World Chorus and some enthusiastic puppets who each land a role as an animal in the song.  Listeners will be entertained as they hear Laurie Berkner, Lucky Diaz and Secret Agent 23 Skidoo rock out with Aaron and the rest of the children, er I mean animals, to a rendition of Dylan’s “Man Gave Names to all the Animals.” 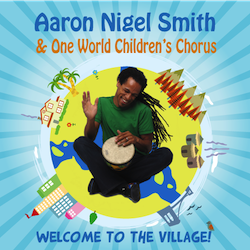 “Welcome, we wish you peace. Welcome to the village, share a song with me.” Those few words speak volumes on Aaron Nigel Smith‘s latest release with One World Chorus, Welcome to the Village, where over 300 children sing renditions of songs from greats like Bob Dylan, Bob Marley, The Beatles, Jewel and Louis Armstrong. Incorporating an eclectic mix of reggae, classical, world and american folk music, among others, Welcome to the Village welcomes families into a cultural celebration of love and gratitude for the things we have and the people around us.

Welcome to the Village is Aaron’s first release with the children of One World Chorus, a non-profit organization committed to using music as a mechanism to “build bridges” for children, both in the United States and abroad. Aaron and his wife, Diedre, co-founded the chorus in 2009. Over the course of the last couple of years, Aaron spent time traveling around the U.S. between Portland, Oregon, Los Angeles, New York City and all the way to Nairobi, Kenya where 30 kids from the Cura Orphanage participated in the recording of this album. The Cura Orphanage is a special place that offers residency for children who have lost their parents to AIDS. Proceeds from the sale of Welcome to the Village will be donated to the orphanage in hopes of building sustainable music and programming.

Aaron carries an extensive background in music and movement, which began while he studied and performed with The American Boychoir School at age 11. Seeking out his passion and love for music, Aaron along with his wife Deidre, founded FUNdamentals of Music and Movement in 2002. FUNdamentals of Music and Movement serves as a music program for over 100 early education centers nationwide.

As much as it is quite evident that Aaron is a talented musician and songwriter, he has also done an excellent job of selecting songs for Welcome to the Village. On a couple of the songs, Aaron brought in fellow friends and highly acclaimed kindie artists for some sweet collaborations. Starting with a rendition of Bob Dylan’s “Man Gave Names,” Laurie Berkner, Lucky Diaz and Secret Agent 23 Skidoo, each join in as an animal while adding a touch of their personality to the mix. There’s even perhaps a subtle reference to Blue Bear as Lucky sings “…great big furry back with blue hair.” But the real showstopper is when Skidoo jumps in with a quick lyrical jaunt about a Platypus which blew our minds! This strange creature has been of particular interest to my daughter lately. Prior to hearing this song, and in just a few seconds, Skidoo schooled us with way more eloquence than I could have managed. It’s an exciting and well-thought out rendition of this classic, oft covered song.

“Grateful,” one of the originals on the album, features Dan Zanes. The song will warm your heart with Zanes’ Dylan-esque vocals encouraging us to give our “friends a big hug for all that they provide.” It’s oozing with sincerity and appreciation for the people around us, the beauty of the planet we live on and the air we breathe. The song is a prime example of Aaron’s talent to write and compose a deeply meaningful, authentic song.

But the true authenticity in Welcome to the Village is of course, the voices of the children, including Aaron’s duo with his son Zion on the Beatles’ cover of “Mother Nature’s Son.” In fact, it was Zion’s idea to sing the song and include it on the album. There are also traditional African songs which include rhythmic, multi-layered percussion, signature to the sounds of that culture. It’s actually these songs that my 3-year-old likes the best. Starting with “Fanga Alafia,” Em’s absolute favorite and one that she sings on her own even after the album is over. And, when I don’t sing the correct pronunciation (in her opinion) she is quick to correct me. There is also “Che Che Cole,” a fun call and response song to which Em immediately participates as if she’s part of the chorus, while Aaron calls out and the children respond masterfully. The album ends with a traditional choir song called “Siyahamba” which can be translated into a song about unity and peace.

Other notable songs include a slowed down, Dub style rendition of Jewel’s “Hands,” which features the kids from the orphanage. The song fits in nicely with the sentiment behind Welcome to the Village as it was meant to provide hope in the face of misfortune. The song is led by a female soloist whose voice is similar in pitch and tone to Jewel’s. The hauntingly beautiful rendition brings me chills as I hear the innocence and emotion of the children’s voices. There is also the educational “In A Book,” an educational reggae song written by Aaron, featuring his son Zion, as a soloist, along with the kids from the chorus spelling out words. For example: Aaron: “It’s in a book .” Chorus: “That’s right, a b-o-o-k.” Even if your little one can’t quite spell yet, he or she is given the opportunity to learn while singing along with these simple lyrics.

My personal favorite happens to be “Sound the Trumpet” which features Aaron (and a male vocalist from the chorus) flexing his operatic muscles on this short, classic piece. I pretty much just love to roll my r’s along with the guys and pretend I actually am an opera singer.

Welcome to the Village is a true reflection, regardless of age, who, what or where you are, you can experience and participate in the joy of music. Not to mention children love to hear other children sing and Aaron is no stranger to making quality music for families. In addition to being a father of two sons, who both appear on this album (as soloists and part of the chorus), he has received various parenting awards for his first two releases Let’s Pretend and Everyone Loves to Dance. He has also appeared on the PBS Kids Emmy Award winning show Between the Lions and is featured on several new Music for Little People releases, including Buckwheat Zydeco’s Bayou Boogie, and World Travels.

Music is fulfilling, brings people together and is meant to be shared. This is exactly what Aaron and the children of One World Chorus bring with the release of Welcome to the Village. In Aaron’s words, “When kids sing together, I hope that they enjoy sharing the gift of music and learning a valuable discipline that can be used to promote positive change in the world. It’s great to see the light in kids’ eyes as they realize just how many other kids are participating in the project.”

On this album, it literally took a village and then some, to create this special treasure. So kick off your shoes and stay a while; you won’t be disappointed. Ages 2 – 5 will enjoy learning, singing along and participating in the album.

See below for videos related to the making of Welcome to the Village.  You can learn more about and support One World Chorus here, as well as, the Cura Orphanage Home here.

Digital samples and downloads can be found on Amazon. The album is also available for download and purchase on iTunes.

Disclosure: I received a copy for possible review and was overjoyed to provide my honest opinion regarding the album.