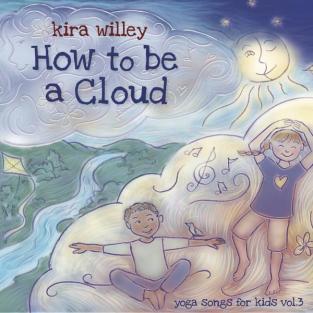 The practice of being mindful is often associated with being still, so as to be fully in the moment. It’s not thinking about the past or future, but a distinguishable present. The idea of purposefully being in the moment, and not thinking about the flurry of things waiting to be checked off throughout the day, or the things I didn’t get to yesterday, seems like an impossible feat on most days.

The times I feel most in the moment are when I’m listening to my favorite song, or when I’m dancing. Yoga is also a reliable resource that helps me find a way to just be.

My daughter is very active and though I have tried to connect with her through yoga, encouraging her to try out various poses, she regularly finds a way to augment our practice by challenging me to try an even harder Twister-like pose or some sort of gymnastic move like flipping over the arm of our couch and then flying down to the floor. Though our zen moments tend to be more active than still, I appreciate that we can both just “be” together, in the moment, mindfully trying things out.

Kira Willey, a popular kindie artist and musical yogini, recently released her third album, How to be a Cloud; Yoga Songs for Kids Vol. 3. Similar to her previous albums, this one includes a full-length “side” of 13 songs followed by 9 bonus tracks featuring yoga instruction. So depending on how you’re feeling, you can choose to sing, dance or get your yoga on, all of which are viable vehicles for cultivating mindfulness, and can be done at the same time. It also helps that the album includes a booklet illustrating yoga poses which removes any awkwardness that comes with trying to figure out how you should position your body.

What struck me most about this album is the clever way the songs are arranged. While most albums usually build to a peak and then wind down, ending with a soft song or lullaby, How to be a Cloud was organized such that the slow songs are interspersed throughout the album. The changing from upbeat boogie tunes to soft, restful songs is similar to the way a yoga class might run where there is guided movement and then there are holding poses. By giving kids the opportunity to be active for a few songs, they are more likely to engage with the slower songs that pique their imagination. “Kids need to move their bodies, it’s how they learn best,” notes Willey. I noticed this with my daughter whose method of cultivating mindfulness is through action, as mentioned above. Feeling her feet hit the ground and then push upward again provides her brain with enough feedback so that she is able to focus and reap the restorative benefits of songs like the title track (“How to be a Cloud”), which encourages sitting and imagining what it feels like to be a cloud, feeling the weightless floating. The restful lullaby, “When You Sleep,” also offers the opportunity for a reflective pause as Willey’s peaceful wishes gracefully glide like dandelion seeds through the air.

There is a lot of joy sprinkled throughout this album and while you can feel it in the aforementioned songs, there are plenty opportunities to break out your happy dance. “Gotta Lotta Happy” reminds us that we can keep our hearts smiling by offering positive energy to others: “Happy is contagious like a cold in a good way/ so let’s not hesitate to share/ we gotta talk about it celebrate it shine a light on it/ because everybody needs it everywhere.” “Wings On A String,” a gorgeous song with soaring vocals that give me chills every time, was written as a kite song because, as Willey explains, “kids love to fly.”

“Colors – 2014,” a remix of the original song that appeared on Willey’s first album, Dance for the Sun, and was later featured in a Dell commercial, features a choir of 75 Kindergartners who bring a powerful element as they sing “I am a rainbow today/ all the colors of the world are in me.” Many listeners will relate to “Dancing with My Daddy,” which is basically a literal translation of the utter joy and magic that happens when Daddy comes home, while “Jazzy” and “Cookie Jar” nab you with some catchy lyrics and hip shaking rhythm. Just try and get those two out of your head!

Willey’s approach to songwriting and passion to encourage kids (and grown-ups) to find beauty in themselves is ever-present throughout this album. Each song, whether upbeat or slow provides a meaningful message that delivers a sense of calm and comfort. Delivered through beautiful melodies, How to be a Cloud offers the comfort of a hug, the warmth of a cup of hot cocoa on a cold day, and a heart full of gratitude. Families will enjoy spending time with this album in a variety of ways, which is especially nice on wintry days when Jack Frost is nipping at our noses. Definitely recommended.

Connect with Willey via Facebook, Twitter and her official site where you can purchase How to be a Cloud, as well as merchandise (including a ribbon ring to use while you dance to “Colors” as shown in the video below).