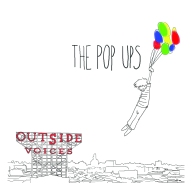 Whenever a new video from The Pop Ups, um, pops up, it’s always brimming with humor and creativity.  Their videos, like their songs, are clever and have a way of luring me into pressing repeat/rewind several times over.

The Brooklyn duo’s latest video for the song “Subway Train” was debuted at the New York International Children’s Film Festival and is ah-mazing.  Wow!  The animation, done by Garret Davis (who did “Box of Crayons”), is an art form in and of itself and a reminder of why music videos are such an integral part of our musical culture.  Frankly, it makes me want to scream “I Want My MTV!”

“Subway Train,” featured on The Pop Ups’ 2010 debut Outside Voices, is a zany underground journey on various subway trains with a bunch of animal riders. The song’s concept is really interesting in that it engages young listeners (5 and under) in a developmentally appropriate way while incorporating educational elements in a non-traditional way. Set to electronic beats, listeners can interact with the song by making animal sounds when prompted. For example, “Apes on the A train going ‘oo oo ah ah’,” Bees on the B train goin’ Bzzz Bzzz,’” etc. It’s a hip, condensed blend of “Old MacDonald Had a Farm” and “The Alphabet Song.”

As usual, The Pop Ups do not disappoint. “Subway Train” is definitely a trip.

Wanna hear the rest of the album, take a listen and consider buying it via the Bandcamp widget below: