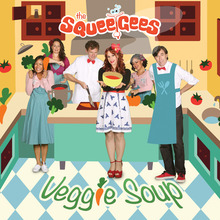 Sometimes we all need a little encouragement. A smile, a hug and a high-five are warm and wonderful ways to offer support. While actions are powerful, hearing the right string of words can sometimes be the best medicine. The Squeegees, an LA-based band, hits just the right notes with today’s world premiere video for “I Can I Can,” a song from their forthcoming album Veggie Soup.

“I Can I Can” with its familiar verses “I think I can I think I can…/You can you can” is a refreshing, versatile anthem that all kids should keep in their back pocket. It works for grown-ups too, particularly during the morning prep before school and bedtime routine. Ahem.

The Squeegees have recorded and are ready to release Veggie Soup but are looking for a little support of their own. To help with post-production costs, The Squeegees have launched a Kickstarter campaign. The campaign ends on October 8 so you still have 6 days to lend a virtual hand if you’d like. Check out the video and read on to learn more about the band.

And if you are in the Los Angeles area on October 18, 2014 don’t miss The Squeegees at The Rose Bowl for the Kidspace Pumpkin Festival!

The Squeegees’s consists of songwriters Samantha Tobey and Pierre de Reeder, along with members Chris Phillips, Moni Wood, Adriana Suyama, and Anne Marie Ceralvo. The band shares a passion for interacting and working with children. Samantha brings a natural flair and years of experience as a “Mommy and Me” instructor and baby sign language teacher to her passion for interacting and working with children. Pierre is a father of two, a music producer, studio owner, and founding member of the seminal Los Angeles band Rilo Kiley, while Chris has charmed many audiences as the drummer for The Squirrel Nut Zippers.

Through very melodic songs with rich harmonies that are not only addictive but also educational, The Squeegees have provided an enjoyable medium for kids and parents alike to learn about eating healthy, nature, movement, eco-consciousness and animal welfare.

Both Brady Rymer and Randy Kaplan are ready to make their next children’s albums and have launched a Kickstarter campaign in hopes to support the recording and production process. With just 4 days left in Brady’s project and 7 days in Randy’s project, there is still time to donate and show your support for these hard working artists. Both Brady and Randy are distinguished children’s artists that regularly produce quality music with depth and a whole lotta soul. Plus, the music just sounds amazing! For those new to Kickstarter: Kickstarter is a fundraising site that allows fans, friends, family and the general public to back a creative endeavor, such as the making of an album.

Both Randy and Brady have been a big part of our lives since my daughter (almost 5) was an infant, but they both have been making music for much longer than that. As such, I have backed both of these campaigns.

With that, I encourage you to check out each campaign, consider showing your support and ultimately  becoming a part of the music you want to hear.

JUST SAY HI! Brady Rymer’s new album for families that ROCK – Brady is a soulful singer with a tender heart and a ton of spirit. His music is uplifting, engaging and captures the spirit of good ole rock n’ roll. In addition to receiving a 2009 Grammy nomination, Brady has received awards and accolades for his work on Love Me For Who I Am, an album inspired by children affected by autism, Asperger’s Syndrome and related disorders. Just Say Hi! will be Brady’s 7th CD and it promises to be a good one! As Brady mentions on his site: “Just Say Hi! is the most personal batch of songs I’ve written; full of kindness, friendship, and love of family.  Songs about things like falling in love with the ice cream girl, learning to play grandma’s red piano, and just crankin’ up your little light of love and lettin’ it shine.”

Throughout his campaign, Brady has been posting updates with the latest one being a snippet of a video for the song “Ice Cream Girl,” inspired by Brady’s wife who drove a Good Humor ice cream truck as a summer job. Brady also offers some fun incentives with a broad range of pledge opportunities. Just in time for the holidays, Brady is offering 3 holiday tracks at $1 or more as a thank you for pledging. They are great songs! One of our favorites is “Untangling the Christmas Lights.” Other incentives include monster stickers and friendship bracelets, t-shirts, personalized and advanced copies of the CD, singing on the record and for those interested in pledging at a higher level, Brady is giving away his first Gibson guitar. So check it out! Even just a few dollars will help!

Randy Kaplan’s new not-JUST-for-kids CD – Randy Kaplan is regularly referred to as a folk troubadour within the children’s genre. His influences run deep within the folk and blues genres and he skillfully delivers songs that are filled with healthy doses of wit and charm. Randy is a master at combining song and storytelling which is directly linked to his uncanny ability to be honest, humble and totally authentic. His lyrics are clever and written in such a way that tickles the funny bone of both adults and children, while also warming their hearts with a rendition of Bob Dylan’s “Forever Young,” which was selected for the Putumayo Kids American Playgound album. His most recent album, Mr. Diddie Wah Diddie, a collection of Country Blues and Ragtime for kids, received high honors and awards including being selected by People magazine (August 2012 issue) as one of 8 Cool Kids’ Albums Now!. Randy also regularly appears on critics lists as one of the top children’s performers to see in concert. And I can personally say that is absolutely accurate! Randy is a natural in front of a crowd and is usually surrounded by groups of children who can be heard shouting, laughing and even yodeling along with him. Randy makes music that he enjoys and feels confident that his audience will enjoy.

Which brings me to Randy’s Kickstarter project. With additional support, Randy will be able to create his 13th album to date (his 5th not-JUST-for-kids album). On his Kickstarter page, you can listen to clips for popular songs from previous albums including “No Nothing,” a song about a monkey who was raised by ducks (one of our favorites!) and the “The Mosquito Song,” among others. Randy also explains how he has been producing family records up until now and what his plans are for making the next one. Backers can also receive advanced mp3s or copies of the new CD, the new CD with a special thank you mentioned in the credits, or even a personal concert via Skype with Randy. There are a broad range of incentives here as well, so take a look and consider helping to make the number 13 a lucky one for Randy!