Even though Mother’s Day has past, North Carolina’s Big Bang Boom manages to keep the spirit of the holiday alive with a new video from their most recent release, Because I Said So!.  “Hippie Mom” is a whole lotta fun.  There’s singing, dancing and hula hoops.  Woo hoo! 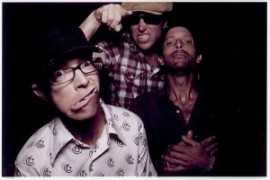 Here’s a new video by North Carolina’s favorite “Power Pop” band for kids, Big Bang Boom, based on the song “Make Me” from their upcoming (Sept. 18) CD, Because I Said So!
The video was shot at the Greensboro Children’s Museum which looks like a pretty sweet place. Filmed by Brian Wimer of Amoeba Films, the video is captivating, not just because of the hypnotic spirals featured throughout but because of all the awesomeness going on at the museum (a giant train, mini shopping carts, even a large set of teeth and a toothbrush!).

“Make Me” is a bouncy kindie rock tune with a great message that is sung from a kid’s perspective, almost like a musical postcard to mom and dad.  “Make Me” suggests that although it feels like kids repeatedly make mistakes they aren’t completely ignoring our corrections as parents. In fact, they want to understand why their mistakes matter.

While listening to the song, I found myself thinking about my own approach in conveying cause and effect to my daughter.  With lyrics like “…it’s not about the rules I’m gonna break/I’m livin in mistake-land/sometimes I don’t see that you have a plan” and “I know it don’t/seem fair/when I didnt learn a lesson that you tried to share./ I wanna learn/ so make me/I need a little push that’s all.”  So, while taking extra time may not prevent all mistakes (after all, part of being a kid is living and learning through mistakes, right?), with a little more understanding the lines and dots might just connect enough for them to remember to shut the lights off or stop slamming the door every other time.

If this is just a glimpse of what’s to come from the Daddy trio, I’m in.  Enjoy!