Christmas is creeping up on us and while many of us are still thinking about gifts or checking last minute items off our list, there are still ways to savor the joys of the season. San Francisco has no shortage of seasonal theater and ballet productions for the young and old. And while all of these productions come highly recommended, oftentimes the length and complexity of the story may supersede the mental capacity of the even younger crowd; 5 and under, specifically. Until now…

This year’s production marks the Company’s transition from the Children’s Creativity Museum to the Southside Theater until the Cowell Theater’s upcoming renovation is complete. The Southside Theater’s seating capactiy features 160 cushioned stadium style seats, making it easy for little bodies to get an unobstructed view of the stage.

Mark Foehringer’s Nutcracker Sweets, while intended for children of all ages, was developed with a special focus on capturing the attention of younger children (5 and under). With a runtime of just 50-minutes, Nutcracker Sweets highlights the most exciting parts of this beloved holiday classic featuring creative costumes, colorful set design and a live orchestra with musical direction by the multi-award winning Michael Morgan.

“Nutcracker Sweets was made for the child in all of us,” said Mark Foehringer, artistic director of Mark Foehringer Dance Project|SF. “The production features storytelling, dance theater, ballet and a live music performance all in one.”

The fact that Foehringer incorporated multiple disciplines into the concept and choreography is what makes this particular adaptation so captivating. The dancers do such an excellent job of expressive movement that it feels as though you can hear what they are saying, even though the show is completely silent.

Nutcracker Sweets mainly revolves around the adventures that unfold throughout Clara’s dreams. Starting out in Herr Drosselmeyer’s toyshop, Scene 1 serves as a prelude to the manifestation of the Nutcracker soldier. Chaos and silliness abound as the Mouse King and Queen infiltrate the toyshop, romping with leaps and flips just before the Mouse King turns Drosselmeyer’s nephew into the Nutcracker doll. Emmy nominated costume designer, Richard Battle, designed a stunning headdress for the Nutcracker, giving the the soldier doll an almost human-like quality. With a swing of his cape, Drosselmeyer changes the life-sized Nutcracker into a miniature, wooden doll and brings it to his niece, Clara.

Scene 2 progresses with a smoke filled stage as Clara falls asleep. The dreamscape begins as the Mouse King and his army challenge the Nutcracker (and his toy soldier army) to a fight. As the battle unfolds, the Nutcracker is almost defeated until Clara rescues him by hitting the Mouse King on the head with her shoe. Swooping in, Drosselmeyer reappears, leading the couple into Candy Land. 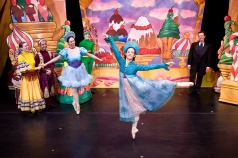 Candy Land’s scenic design, created by Peter Crompton, is perhaps the most interesting and colorful with its one-dimensional images of frosted confections and cherry topped ice cream sundaes. Scene 3 is the most dance intensive part of the production as Clara and the Nutcracker prince are presented with sweets of all sorts from the Sugar Plum Fairy. After a delightful party, everyone disappears as Clara’s dream fades.

Scene 4 picks up with Clara coming into Drosselmeyer’s toyshop where she is once again reunited with her Nutcracker Prince. This is the only part of the production where I felt like the story was a bit rushed, as though it was at risk of exceeding the 50 minute mark. Although, based on the aforementioned ages of the target audience, it’s likely that this observation went unnoticed. From my daughter’s standpoint, for example, things made perfect sense and ended quite happily.

Overall, I was entertained by the show and impressed by the thought that went into creating a special experience for the younger set. The choreography was expressive and moving, and the costumes were bright and inspiring. I took a peek around the audience from time to time to gauge their response and saw nothing but wide eyes and smiles.

Perhaps the most spectacular piece of the production was the characterization of Herr Drosselmeyer as a magician and the significant role he played in making the transitions seamless through the use of his cloak. Although the talented cast danced wonderfully and with vibrant smiles, it was the character of Herr Drosselemeyer that continually caught my eye. Using Drosselmeyer’s cape to move the show along in such a smooth way was a subtle but significant part of show that upheld the magic of the story. It was as if the cloak was a character all on its own, which is a hat tip to Mark Foehringer’s excellent direction and choreography.

As a bonus, the dancers made themselves available for a meet and greet afterwards which added to the excitement of the entire experience, especially since the Sugar Plum Fairy was more than happy to lend her wand for photo opportunities. This was the icing on the cake as many of the young theater-goers eagerly awaited their turn to snuggle next to their favorite character and smile for the camera. In fact, I was instructed several times, by my daughter, to make sure I got a picture of her with her favorite dancers, which is profound because getting her to pose and smile for the camera at the same time is akin to asking her if I can brush her hair.

For parents looking to introduce this beloved tale to their little ones, Mark Foehringer’s Nutcracker Sweets is a great way to go. It upholds the charm and fantasy of the classic tale while captivating the hearts and minds of the young and young at heart.

The final two performances will take place on the following days. Location, pricing and box office information can also be found below, as well as a video preview.