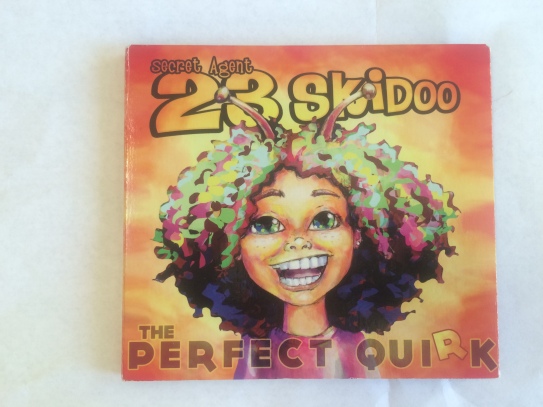 Secret Agent 23 Skidoo’s 2014 Grammy nominated release rode in on the wave of encouraging kids to be themselves. This empowering proposition has been the underpinning of Skidoo’s genesis as a kids’ musician.

Throughout his career, Skidoo has been a staunch advocate of embracing your quirks, standing proud and tall and being who you are. His expressive style of encouraging kids to show their natural, bold colors is complemented well with the tonal choices made by North Carolina-based artist, John Hairston, Jr.

Hairston, jr. is a fine art painter who often captures the juxtaposition of beauty and oddity. The images that appear throughout The Perfect Quirk packaging are unique for a kids’ album cover, and together with the music make a cohesive package. Skidoo is a kid hop artist and pays respect to the hip hop genre by including elements such as his graffiti tagged name, and the third eye of the boy on the back cover.

Emily carried this CD around for weeks completely fascinated by the metamorphic characteristics of the kids, especially the boy with the third eye. She was intrigued and wanted to know what the reasoning was behind the choices made for the cover. Seeing the peculiar images piqued her curiosity and imagination over and over again which ultimately enhance her listening experience.

“The kids and parents all represent a mutation towards higher consciousness. The boy is spiritual, with a 3rd eye representing higher awareness. The girl has antennae, representing alien or intergalactic consciousness. The mother is multi-armed, riffing off Hindu deities and the Dad has angel wings. The race is supposed to be a futuristic mix of all races, when racism has been put down and everybody gets with everybody. The skin color, hairstyle, face and eye shape, etc.”

When The Perfect Quirk was released in June 2014, Skidoo declared that year as “The Year of the Weird.”  As Skidoo expressed in our interview,

“The etymology of ‘weird’ has its origin in the Old English word ‘wyrd,’ which was a noun that means ‘fate or destiny.’ Weird means interesting, authentic, unexpected. It means not basing how you act, look and create on what others are doing or expect from you. It’s good to be aware of other’s opinions, but not to let them dominate your natural self.”

From concept to cover, The Perfect Quirk speaks to the fact that in today’s society, with all its social pressures and expectations, it’s important now more than ever that we make a statement and rise against what is thought of as the norm.  After all, is there really a norm anymore? We must embrace both our own special qualities, and those of each other, as we work toward building a more peaceful union. 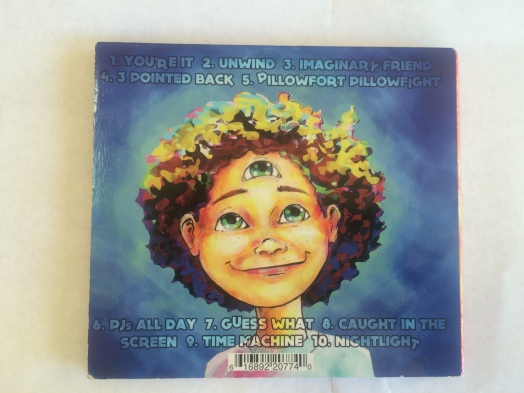 “Minds hungry for novelty will be the most healthy, and hopefully, the ones to push the evolution of our species forward. The “weirdos,” or fringe outliers, will begin a mutation toward building a more wise, openminded, spiritually attuned species.”

Explore more of John Hairston, Jr.’s art by checking out his portfolio at All City Studios.