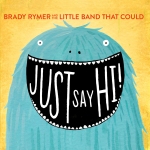 In just a few days, we will find out who will triumphantly raise the iconic golden gramophone as the winner of Best Children’s Album. This year’s nominees present a truly eclectic mix, with four of them representing kindie music, and a fifth being an audio book about a girl’s miraculous journey of survival from a Taliban attack. I previously posted an audio playlist featuring all 5 nominees, and today thought it would be great to post some of our favorite videos by the kindie music nominees. For additional info and to listen to the audio clips, including an excerpt by Neela Vaswani for I Am Malala: The Girl Who Stood Up for Education and Was Shot by the Taliban, check out this playlist.

There is a live concert featuring the Grammy nominees in Los Angeles February 7, 2015, but for those unable to attend, Sirius XM’s Kids Place Live (ch.78) will be airing a LIVE broadcast of the Children’s GRAMMY Awards Concert along with some artist interviews. Listen in on Saturday at 11:00 pm ET, and again on Sunday, February 8, 2015 at 12:00 pm ET and 5:00 pm ET

**NOTE: The Children’s Album category is not presented during the live show in the evening so make sure to tune-in to the GRAMMY Awards telecast at http://www.grammy.com/live 3p EST/12p PST.

Okee Dokee Brothers – Through the Woods

The Pop Ups – All These Shapes

Brady Rymer – Get This Party Started