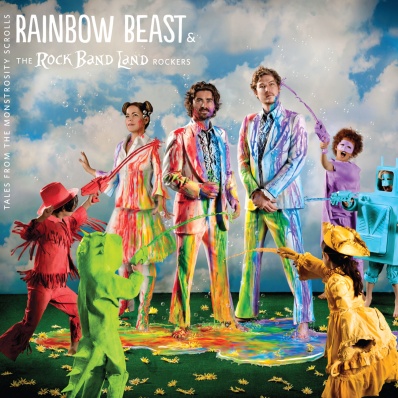 Description: A magical exploration that celebrates the intricacies of a child’s imagination delivered with musical mastery.

While I am tidying up my review of this album, along with some other goodies from Rainbow Beast, there is absolutely no reason to delay the presentation of this awe-inducing piece of work. Tales From The Monstrosity Scrolls is filled with powerful rock songs made up of original stories written by kids between the ages of 4-8 years old. The kids, referred to as The Rock Band Land Rockers, are members of a collaborative creativity program in San Francisco that is run by Rainbow Beast members Brian Gorman and Marcus Stoesz. The songs may seem dark, certainly darker than standard children’s music today, but I would encourage you to listen to them in their entirety because of the deeply profound messages they contain. Sure, there are superheroes, dragons and fluffy clouds, but they are presented in an atypical way that turns sticky sweet sing-alongs on their head. And, if you’ve spent any time around an imaginative 1st grader, you know the whacky paths their creativity can lead them! By providing a safe, supportive environment Gorman and Stoesz have found a way to honor the intellect and potential of these young kids by allowing them to seek out their polka-dot skeleton and ice girl fantasies within the relative safety of a rock-n-roll education.