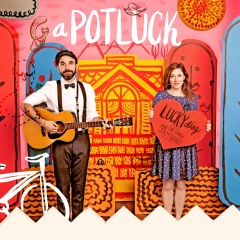 If you just take a look at the deliciously colorful album cover of Lucky Diaz and the Family Jam Band’s latest release, “A Potluck,” you will get a sense of how the album feels.  It’s bright, bold and filled with tons of charm.

Los Angeles-based Lucky Diaz and the Family Jam Band is led by the recently married Lucky Diaz and Alisha Gaddis.  “A Potluck” is their second full-length release which brings us a diverse listening experience made up of many different musical styles aiming to bring fun and delight to children (and grown-ups alike!).  Throughout the album, you can feel the pleasure Diaz and his bandmates derive from making good kids music.  Each song is like a sweet piece of optimistic pie.

Right off the bat, the first 3 songs open the album with true (k)indie-pop flare.  Starting with their first single, the electro-pop appetizer “Lines and Dots,” followed by “On My Bike,” which actually includes the sound effect of a bike bell (true bike awesomeness), and “Lemonade Stand” are all hand-clapping, upbeat numbers that are sure to get your body moving.

My favorite song on the album is the fiesta filled “Monkey Jones” which includes a solid beat and lots of horns that take you to the Caribbean, dancing barefoot on the beach.  Even better is the fact that “Day-O” (The Banana Boat Song) can be heard echoing in the background as the song ends.

Kids will also enjoy crowing like a rooster in the swing-a-delic Lil’ Red Rooster and the “meow meow meow” chorus of “Tres Ratones,” which was inspired by Lucky’s Mexican heritage.  Although the song is in Spanish, E has already learned the words and exclaims “Oh, this is my song!” every time she hears it.

The album wraps up with another poem called “Night” which brings us to the start of the Potluck where people are gathering together for the delicious feast while reminding us that “…we’re all so different but connected every one.  We each bring something special to the table and that’s what makes it so much fun.”  I love how both “Morning” and “Night” act as a prologue and epilogue, tying the album together while making clever references to either a character or message within a song.

I can’t express enough love for Lucky Diaz and the Family Jam Band.  Their enthusiasm is infectious and “A Potluck” is sure to be a delicious summer treat!

Listen to samples and/or buy/download their album from Amazon here or iTunes here.
Read an interview with Lucky and Alisha (courtesy of Dadnabbit) here.

One thought on “Check It Out: Lucky Diaz and The Family Band – A Potluck”